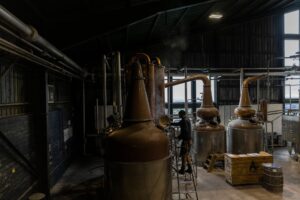 Britain’s economy has been buffeted by the effects of Brexit, the war in Ukraine and, most recently, the government’s dramatic reversal on a series of planned tax cuts that led to the resignation of Prime Minister Liz Truss. But for Scotland’s whisky producers, business is booming, and the British pound’s precipitous decline against major currencies is providing an extra boost, making whisky more affordable for buyers outside of Britain.

“The currency has had a major effect — there’s no question about that,” said John Stirling, the co-founder of Arbikie Distillery in Scotland.

The surge in exports, driven by higher demand from the United States and the Asia-Pacific region, comes as 20 distilleries have opened in Scotland in the past six years, bringing the total number of distilleries there to 141.

As demand for Scotch rises, the pound is trading near historically weak levels. Last month, the pound briefly sank to $1.035, a record low against the dollar in response to Ms. Truss’s economic overhaul, which included £45 billion ($50 billion) in unfunded tax cuts, spooking investors. Her government has since scrapped almost all of the planned cuts, but the pound’s decline has been part of a larger downward trend against major currencies, including those used in the United States, France, Taiwan, India, Singapore and China, the top destinations for Scotch. In the year ending in July, 18 percent of whisky exports, by value, went to the United States, according to government data.

Britain is also facing systemic economic issues, such as weak productivity, low pay growth, a shortage of workers and unsteady business investment since the country voted in 2016 to leave the European Union. On Wednesday, the government reported that the country’s consumer prices had risen 10.1 percent in the year through September, driven in part by food prices that recorded their largest increase in more than 40 years.
Image
Mr. Perez-Solar with one of the casks at Arbikie Distillery. Twenty distilleries have opened in Scotland in the past six years.

With high inflation expected to weigh on consumer spending and business investment, the International Monetary Fund predicted the British economy would go from 3.6 percent growth this year to a 0.3 percent contraction next year.

But whisky companies like James Eadie have been able to weather the economic headwinds.

“Overall if you look at the last two to three years, we’ve just been going through an incredibly buoyant time,” Rupert Patrick, the chief executive of James Eadie, said. “We’ve all been slightly scratching our heads saying, I wonder why it is so good at the moment.”