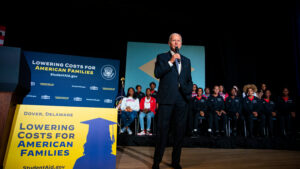 DOVER, Del. — President Biden said Friday that 22 million Americans had applied for federal student loan relief since his administration opened the program this week, and he accused Republicans of hypocrisy for trying to block the initiative.

In a speech at Delaware State University, a historically Black school, Mr. Biden tried to draw sharp distinctions with Republicans less than three weeks before the midterm elections.

“Republican members of Congress and Republican governors are doing everything they can to deny this relief, even to their own constituents,” Mr. Biden said, a day after courts rejected two legal challenges to the measure that could cost the federal government hundreds of billions of dollars.

But later on Friday, the Court of Appeals for the Eighth Circuit temporarily blocked the government from discharging debt under its relief plan until the court rules on an emergency request by Republican-led states in the legal dispute.

The plan cancels $10,000 in debt for those earning less than $125,000 per year, or $250,000 per household, and $20,000 for those who received Pell grants for low-income families. For tens of millions of people, that level of relief would wipe out their federal student loan debt. The government plans to accept applications until Dec. 31, 2023.

“In less than a week, just close to 22 million people have already given us the information to be considered for this life-changing relief,” Mr. Biden told a crowd at the university, where more than 75 percent of the students receive Pell grants.

The president compared the student debt relief plan to the $2 trillion tax cuts that Republicans passed in 2017 and the loan forgiveness that businesses received during the pandemic. He specifically called out some of his most staunch critics, such as Representative Marjorie Taylor Greene, Republican of Georgia, and Senator Ted Cruz, Republican of Texas.

Ms. Greene and her husband received a $180,000 loan from the Paycheck Protection Program that was subsequently forgiven, but called student loan forgiveness “completely unfair”; Mr. Cruz referred to a hypothetical recipient of student debt relief as a “slacker barista who wasted seven years in college studying completely useless things.”

“Who in the hell do they think they are?” Mr. Biden asked, drawing cheers.

The Education Department has estimated that the program will cost $379 billion over its lifetime, which is more than 30 years.

Mr. Biden said the cost was affordable and noted his administration’s record of deficit reduction. Treasury Department figures showed that the federal budget deficit fell from $2.8 trillion a year ago to $1.4 trillion for the 2022 fiscal year, largely thanks to waning pandemic emergency spending.

How Times reporters cover politics. We rely on our journalists to be independent observers. So while Times staff members may vote, they are not allowed to endorse or campaign for candidates or political causes. This includes participating in marches or rallies in support of a movement or giving money to, or raising money for, any political candidate or election cause.
Learn more about our process.

The Biden administration began accepting applications for the debt relief on Monday, and millions of borrowers made submissions as the new portal went live. The Education Department had said it would not cancel any loans until Sunday at the earliest, before the appeals court issued its stay.

Mr. Biden enacted the debt forgiveness program by invoking a 2003 federal law that allows the education secretary to modify financial assistance programs for students “in connection with a war or other military operation or national emergency.” The Biden administration has argued that the pandemic constitutes such an emergency.

Although the lawsuits were expected, legal experts had expressed doubts that those trying to halt the program would have standing to sue.

This week, a federal judge appointed by President George W. Bush dismissed a lawsuit brought by Nebraska, Missouri, Arkansas, Iowa, Kansas and South Carolina. The judge said the states had not demonstrated that they were injured by the debt forgiveness. But the Court of Appeals for the Eighth Circuit granted a temporary stay on Friday.

Separately, Justice Amy Coney Barrett rejected a challenge to the policy that had been brought by a taxpayers’ association in Wisconsin.

More legal challenges are looming. The Biden administration had been racing to ensure that the program is operational before its opponents found a judge who would freeze it, and it has already faced some backlash for scaling back its initial ambitions.

In late September, the Department of Education indicated that some Federal Family Education Loans could no longer be consolidated into direct federal loans, which are eligible for forgiveness. This change would prevent potentially hundreds of thousands of borrowers who thought they were eligible for student loan forgiveness from having their debts cleared.